CONTENT
WHERE KINGS AND PRESIDENTS MEET
High-ranking guests sharing the N1 skybox
01
INTRO
«GIANNI INFANTINO'S RUSSIAN ODYSSEY»
Interview with FIFA President Gianni Infantino
02
«THE MOST INTERESTING THING IS HOW THE WORLD CUP WILL CHANGE OUR COUNTRY»
Interview with 2018 Local Organising Committee CEO Alexey Sorokin
03
«RUSSIA IS A COUNTRY THAT NEEDS AN AMBITIOUS GOAL»
Vitaly Mutko on the 2018 FIFA World Cup
04
THE CAPTAIN. THE LEADER. THE HERO
The incredible journey of Luca Modrić
05
TOP 10 PLAYERS
The tournament's most memorable moments
06
WORLD CUP DRAMA AND TEARS
Счастливчики и неудачники мундиаля
07
«WE HAVE NO RIGHT TO REST ON OUR LAURELS»
Interview with Russian national team coach Stanislav Cherchesov
08
TRIUMPHAL MARCH
A portrait of France coach Didier Deschamps
09
CROATIA'S MIRACLE WORKER
How Zlatko Dalić achieved something truly special
10
A VERTICAL TAKE-OFF
The incredible story of Néstor Pitana
11
THE UNSUNG HEROES
How the volunteers coped with their manifold tasks
12
A TRIUMPH FOR YOUTH PARTICIPATION
FIFA World Cup sponsors putting young fans at the heart of proceedings
13
TOGETHER AS ONE
The FIFA World Cup assuming its social responsibility
14
AMBASSADORS AND STARS
Meet the artists who represented Russia at the FIFA World Cup
15
ALL EYES ON RUSSIA
A report from Konstantin Palace and Moscow State Kremlin Palace
16
AN INTERCITY JOURNEY
Travelling across Russia
17
STADIUMS AS A NATIONAL IDEA
Ultra-modern sports buildings and architectural statements
18
LESSONS IN LIAISON
Team liaison officers found out that every detail counts
19
A PEEK BEHIND THE SCENES
20
WOULD YOU LOVE ME!
Film director Felix Mikhailov spent three years showing Russia to the world
21
POST IT ASAP!
Some of the most popular posts
22
WELCOME THE DREAM!
The FIFA World Cup's resplendent branding
23
CAPTURING THAT ONE MOMENT IN TIME
The best photos of the 2018 FIFA World Cup
24
FACTS AND FIGURES
25
RESULTS AND STANDINGS
26
THE MAGIC LANTERN OF THE WORLD CUP
A unique phenomenon in contemporary civilisation
27
Some quirky facts about the participating teams

RU
EN
TRIUMPHAL MARCH
09
Alexander Shmurnov describes how Didier Deschamps won
the FIFA World Cup, first as a player and then as a coach.
/ 27
written as "defensive-midfielder-team-leader", because it is, in fact, a single term for a combination of roles.

Deschamps grew up in Bayonne in the French Basque country, where rugby was the number one sport. His rugby-playing skills would prove useful to Deschamps, not least the ability to instantly decide on the best option upon receiving the ball, when hesitation in rugby could see you buried under a pile of bodies in the blink of an eye.

In both spirit and nature, he is a true Gascon, fearless and sometimes fiery, but more of a de Tréville than a d'Artagnan. At the age of nine, with his father's (a former rugby player) blessing, the young Didier joined Bayonne football club and, at 16, left for the big city. Not to Paris, which was something of a footballing backwater in the mid-1980s, but to Nantes, which was just the opposite. By the time he was 20, Deschamps was already the FC Nantes captain, one of the youngest skippers in the club's history. "The man who talks" was what one might have called him at the time. "I always enjoyed being a leader and I'd always speak a lot on the pitch. This is my usual way," Deschamps admitted in several interviews in which he showed he was not afraid to speak his mind off the pitch
as well.
After coming up short
at Brazil 2014,
Didier Deschamps
LED HIS TEAM
TO VICTORY

idier Deschamps' playing role was once described by the French daily L'Équipe as: "The defensive midfielder team leader". At first, many thought that there was something amiss with the punctuation, but no, it was actually correct and also very accurate. In English it could probably be
In April 1989, Deschamps received his first international call-up from then coach Michel Platini, France's iconic former European champion and three-time Ballon d'Or winner. Platini wanted to transform Deschamps from a tenacious defensive midfielder into a more creative player. The plan initially worked as he began to support the forwards and even score his first two goals for the national team, in World Cup qualifying matches against Cyprus and Scotland. Platini's strategy was ultimately unsuccessful, as Les Bleus failed to qualify for the 1990 World Cup, losing out to Yugoslavia and Scotland. Deschamps would later admit that he'd been played out of position, which was of course Platini's mistake. Asked about this in a later interview, he said: "I always preferred the libero role, which taught me to get a good view of the pitch, like when I played for Nantes in the late 1980s. Playing as a central midfielder with unfamiliar functions, as Platini wanted me to do for the national team in the qualification phase of the 1990 World Cup, was not my cup of tea."

However, it was not simply a question of position. Deschamps was a leader no matter where he played. He could have been moved closer to the defence or even to the flanks, although thankfully no coach ever asked that of him. Even on the bench he would have remained the leader of any team. With his growing influence, intuitive play and game-managing skills, Deschamps proved himself to be the archetypal all-round player with his next club Olympique de Marseille. Indeed, it was largely down to him that OM won the UEFA Champions League in 1993, beating AC Milan in the final. He was also the driving force behind France winning the 1998 World Cup on home soil, where his leadership skills as captain were crucial.

A year after that unforgettable triumph, Didier ended a five-year spell with Juventus, where he won a second Champions League crown and three Serie A titles, to join Chelsea for a single season. It wasn't his most successful period as he was again deployed in a central midfield role. "I enjoy influencing games, but here 90 per cent of the time the ball goes over my head," he said not long after moving to London. However, winning the 2000 FA Cup was some consolation for Deschamps, who stamped his authority on the game. His contribution to the English top flight may have been short-lived but he laid down a marker by opening the door to other superstars and coaches thinking the continental way.
Deschamps is
THE ONLY
FRENCHMAN
to win the
World Cup
as a player
and a coach 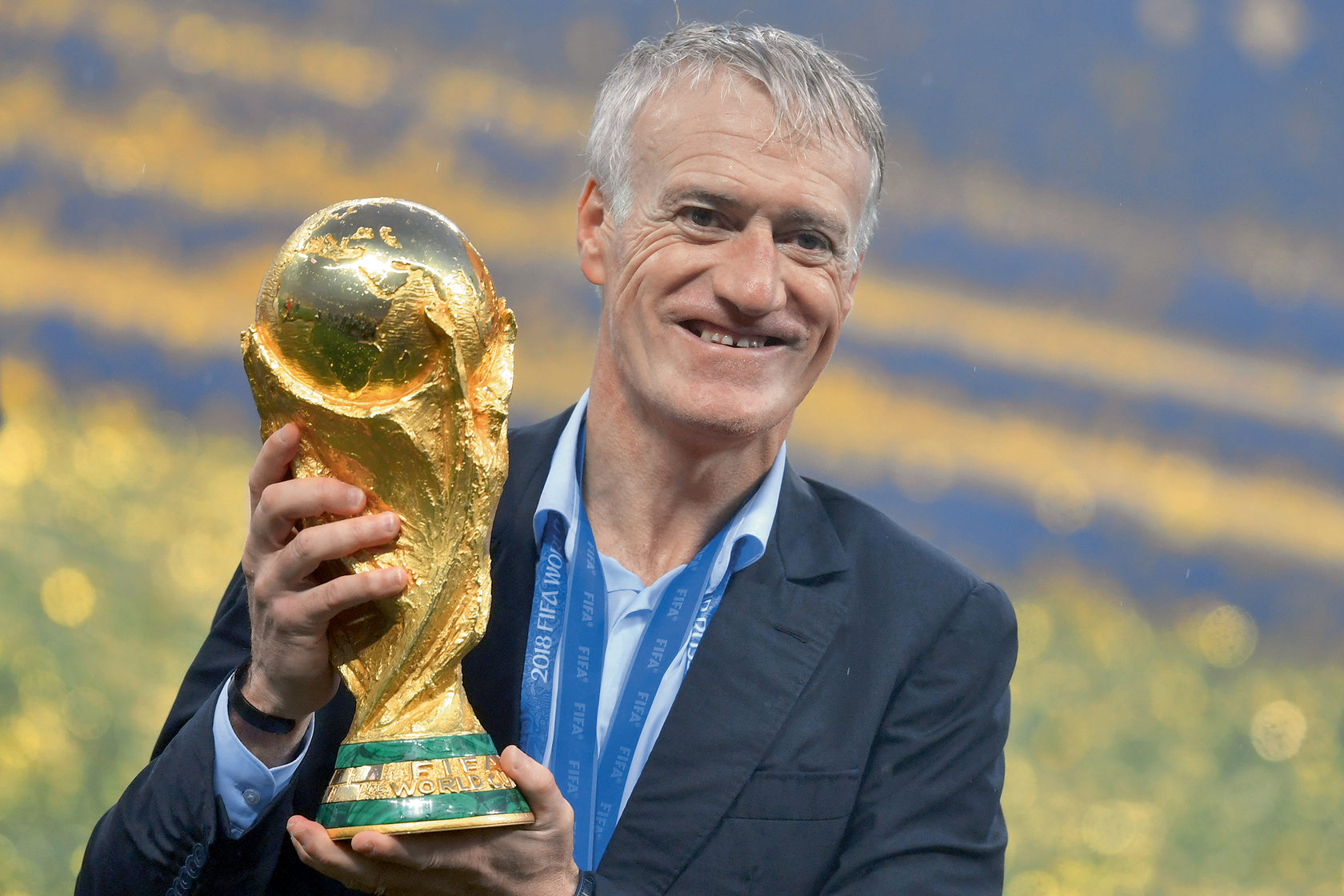 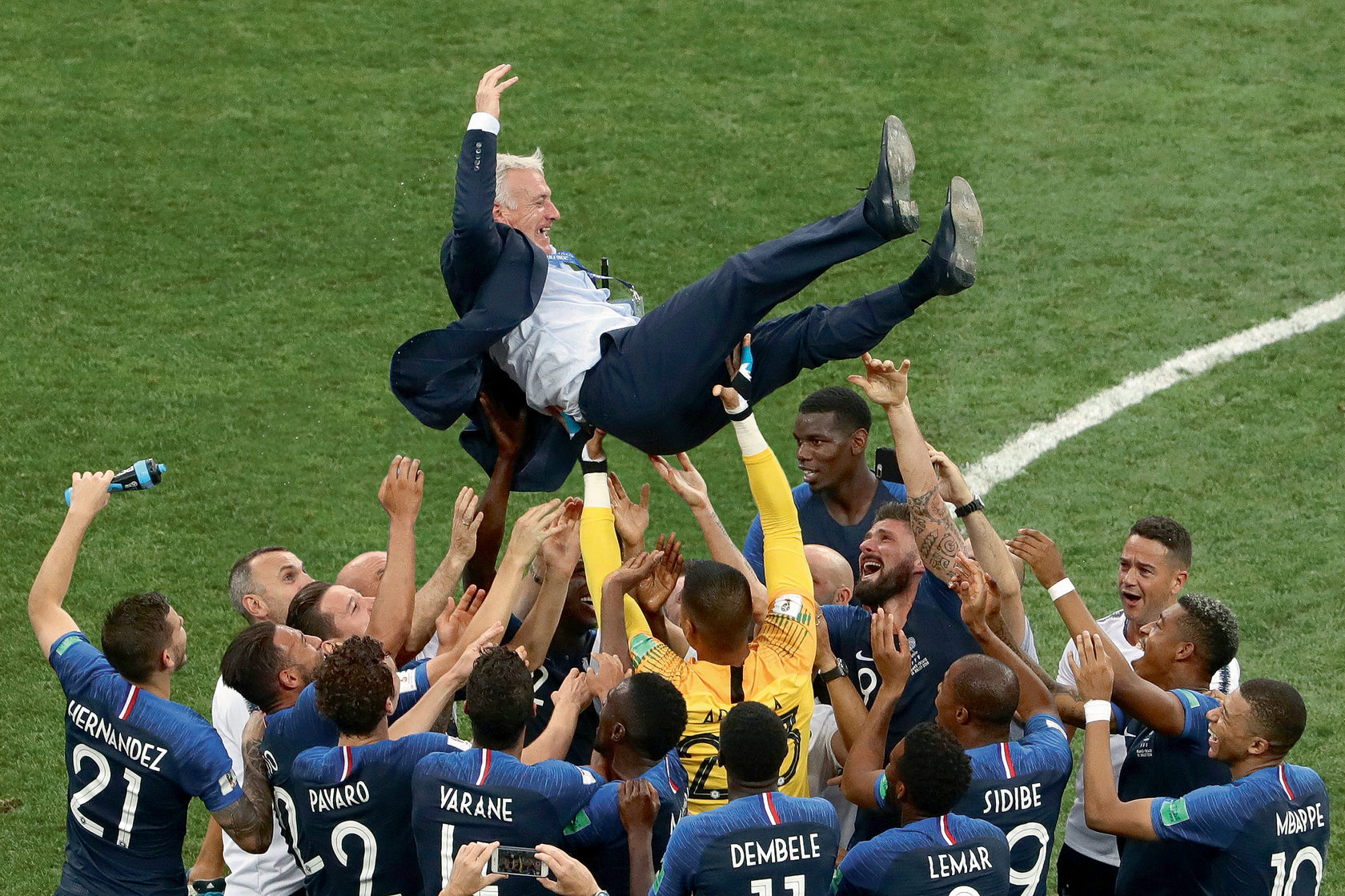 After retiring as a player in 2001, Deschamps, who, let's not forget, also won EURO 2000 with France, transitioned into coaching, starting at AS Monaco. A bright future was expected of him, not least from his assistant at Monaco, Jean Petit, who could see straight away that he would prove a success. Not necessarily only at Monaco – who were runners-up in the 2004 Champions League with Deschamps at the helm – but at an even more prestigious club. "Didier has the most important qualities you need as a coach: he has a subtle understanding of the game, learns fast and knows how to combine a respect for discipline and principles with his love for expression and improvisation," said Petit, adding: "Deschamps is a lot like Arsène Wenger, but Didier is more vivid and passionate, which is crucial for a great coach."

Deschamps' coaching progression wasn't all plain sailing, however. His strong character, occasional harsh words and controversial decisions gave him the image of a somewhat volatile man. But that was just how he was, and nor was he afraid to admit his mistakes. Nine months after his resignation from Monaco in September 2005, following a poor start to the season and a disagreement with the club's president, the Frenchman was back in management at Juventus, where he succeeded in gaining promotion back to Serie A in the aftermath of the infamous match-fixing scandal that had tarnished the club's name.

In 2009, Deschamps moved on to Marseille, where he spent three years and enjoyed instant success by guiding them to their first Ligue 1 title in 18 years. He left in July 2012 after Marseille finished a distant 10th in the league and was quickly appointed as head coach of the French national team, succeeding Laurent Blanc. After reaching the quarter-finals of the 2014 World Cup and the final of EURO 2016, where his side were beaten on home soil by Portugal, expectations rose again ahead of the World Cup in Russia, for which France were one of the favourites. Much of the build-up centred on the relationship between Deschamps and playmaker Dimitri Payet. "My team doesn't need a footballer with this playing style," Deschamps once said bluntly about Payet when Marseille were considering buying him. But at EURO 2016 Deschamps had a change of heart, and Payet was not only invited to join the national team but also given licence to be the creative link between midfield and attack. Payet responded by having a fabulous tournament but sadly missed out on Russia thanks to an injury sustained during Marseille's Europa League final defeat by Atlético Madrid.

There were times during the 2018 World Cup when the French attack looked somewhat lacklustre. After they had beaten Belgium in the semi-final, Thibaut Courtois actually labelled them an "anti-football team». However, Deschamps showed what can be done with the combination of talent, teamwork and, most of all, togetherness. Plus, of course, they had the unbelievable speed of Kylian Mbappé. As the World Cup wore on, Deschamps was able to mould an effective unit that supported and played for each other. He didn't need a world-class No. 9 with super-advanced skills and intelligence. He needed players who were ready to work within a certain plan, to fight and press their opponents. This was the main reason why Karim Benzema was left out of the squad, even though many claimed there were other factors outside of football. But Deschamps is not one to allow personal situations to influence his management style. He is a man of who concentrates solely on the job.

He may be occasionally arrogant and at times implacable, but he knows how to blend talent together and to recognise what works and what doesn't. In one of his press conferences a month before the World Cup, he suddenly mentioned the man who helped him win the 1998 World Cup and EURO 2000, Zinedine Zidane: "He is outstandingly talented as a leader and a creative mind. I believe that one day Zizou will manage the France national team and achieve great results."

Although he was the man of the moment, Deschamps preferred to laud his possible successor rather than sing his own praises. And while some might have questioned his authority to make those claims at the time, few would dispute it now. After all, he has secured his place in history as only the third person, after Mario Zagallo and Franz Beckenbauer, to win the World Cup both as a player and a coach.